Age Action is calling for the first increase in the State Pension since 2009 in Budget 2016.

The organisation, representing thousands of older people across Ireland, today set out its top five priorities for next month’s budget. 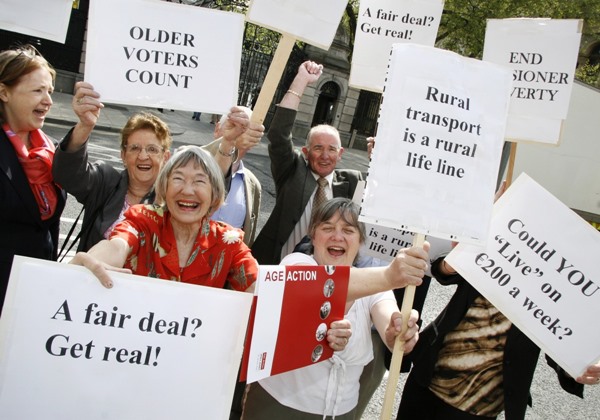 Age Action has put forward its submissions for Budget 2016

Justin Moran, Head of Advocacy and Communications at Age Action, said: “Since 2009 an older person depending on the State Pension and the Household Benefits package has seen their income cut by more than €13 a week.

“They’re struggling to pay new taxes along with rising fuel and health costs. Pensioners in this country should not be forced to choose between paying for medicine and keeping the heat on.”

During the summer Age Action members across the country met and highlighted their priorities for this year’s budget:

Justin Moran continued: “Older people spent a lifetime building this country. They shouldered their share of the burden of austerity.

“As the economy returns to growth, they have a legitimate expectation that the sacrifices they made will be acknowledged.

“After years of cuts to income supports for older people, next month’s budget is an opportunity to restore value to a stagnant State Pension and to reverse cuts to vital income supports like the Telephone Allowance.”

Age Action also highlighted the need for investment in supports to enable older people to remain longer in their homes.

Since 2009 there has been a substantial reduction in home help hours despite the number of people aged 85 and over increasing by 11 per cent in the last three years.

Justin Moran continued: “In recent years there has been a 44 per cent increase in the number of older people in nursing homes categorised as ‘low dependency’ by the HSE.

“More home and community supports would enable many of these people to stay at home longer. That’s a better outcome for older people, it’s in line with Government policy and it would help to reduce the cost of the Nursing Home Support Scheme.”

Along with its key priorities, Age Action also published detailed submissions it made to a number of individual government departments.

Submission to the Department of Health (284 KB)

Submission to the Department of Social Protection (278 KB)

Submission to the Department of Environment, Community and Local Government (153 KB)

Submission to the Department of Foreign Affairs (201 KB)

Submission to the Department of Education (168 KB)

Submission to the Department of Communications, Energy and Natural Resources (221 KB)

Age Action were notified yesterday that they have been shortlisted as finalists in Category 4 of the Good Governance Awards.

We are very proud to be recognised for the work that we do. Congratulations to our entire team at Age Action and to our fellow nominees; we're looking forward to the Awards on November 17th.

The other shortlisted organisations in Category 4 include BeLonG To Youth Services, Irish Hospice Foundation, The Ark, Dublin and The Care Trust

See Here for our Annual Report 2021 that was nominated.