As we look to recovery from the COVID-19 pandemic as a society it is crucial that older people are not further left behind and that enduring inequalities which have been exacerbated as a result of the pandemic are addressed. Addressing the challenges and seizing the opportunities of ageing requires a whole-of-Government approach.

In the context of Budget 2021 Age Action is urging Government to honour their existing commitments and to proceed with the necessary structural reform needed for the services that we will all increasingly rely on as we age: health, social care supports, pensions and housing.

The independent UN expert on the enjoyment of all human rights by older persons also called for older persons to be prioritized throughout the recovery phase of COVID-19 and beyond. Moreover, socioeconomic relief measures and safety nets must be adopted immediately saying

“It is essential to ensure the income security of older persons, in particular older women”, she said, highlighting that “universal old age pensions and adequate entitlement levels” are necessary for “inclusive long-term recovery”.

In the absence of a detailed analysis of the cost of ageing, questions remain about whether welfare supports through the annual budgetary process are adequate to meet people’s needs. For example, it is acknowledged that there is an assumption that the State pension is not designed for those who still pay private rents or have a mortgage. Welcome work by the Minimum Essential Standards of Living (MESL) cost analysis shows the level of income adequacy for groups – including pensioners – across society, however it must be noted that the data is based on the assumption of someone in good health, without any care needs and living in social housing which is reasonably insulated and energy efficient. Without knowing the true cost of ageing for disparate groups in older age, it is not possible to assess whether current income supports meet the true cost of living in older age. Age Action is calling on Government to commission a study on the cost of ageing to inform evidenced based policy responses.

Age Action received almost daily calls and contacts from those in receipt of the State pension who had lost their jobs and were worried about how they would meet their cost of living.

We have seen in recent months that many of those who rely solely on the State pension and secondary supports did not have the financial bandwidth during COVID-19 to meet the hidden costs of self-isolation, care costs and additional costs.

As we look to recovery from the COVID-19 pandemic as a society it is crucial that older people are not further left behind and that enduring inequalities which have been exacerbated as a result of the pandemic are addressed.

At the beginning of March 2020 pre-pandemic, we saw that the State pension had not kept pace with the cost of living in recent years: Budget 2020 saw no change to the State pension, a small increase to the Living Alone Increase and an overall increase of €1.08-€6.08 to the weekly income of older people in receipt of all main benefits, eroding gains in the previous Budgets.

Latest EU SILC statistics poverty data showed us that those aged over 65 were showing the slowest recovery still from the Recession with an extra 20,000 people being at risk of poverty year-on-year. There were an increased number of over 65s either at work or looking for work to support their income, with similar increases for those in the labour market aged 60-64 and 55-59.

The top rate of all current State pension contributions remains substantially below the at risk of poverty rate. The top rate of the contributory State pension sits at 32% of average earnings: this is a worrying 1.2% yearly drop on the 2018 figure and has fallen further below the 34% commitment in the Roadmap for Pensions Reform from 2018.

The gender pensions gap remains at 35% and wider pension inequalities continue to exist for those in low paid, part-time and precarious work throughout their working lives.

Social welfare increases announced in recent Budgets had the unintended consequence of pushing many people just over the threshold for secondary benefits by small increases, therefore losing their entitlement to some of these benefits.

Therefore, it is crucial that any social welfare increases are matched by corresponding threshold increases, and for the system to work cohesively to protect against poverty.

Age Action is calling for an increase the weekly State Pension of €5 per week to build towards achieving the Government's commitment in the Roadmap for Pensions Reform 2018-2023 for a State Pension set at 34% of average weekly earnings. The Government should De-politicise the setting of the State Pension – and implement commitments in the ‘Roadmap for Pension Reform 2018-2013’ - by introducing a triple lock which guarantees that the basic State Pension rises each year by a minimum of 2.5%, the rate of inflation or average earnings growth – whichever is the largest.

Prior to the pandemic we saw that over 65s in Ireland had the largest year-on-year rise in being at risk of poverty. Without urgent resourcing and delivery on the existing commitments, the ability of older people to live with dignity, above the poverty line and with timely access to the supports they need is severely undermined.

It is in this context that we urge Government to consider the appointment of a Commissioner for Ageing to act as an independent voice for our ageing society, to highlight the needs of us all as we age and to help in the adoption of a whole-of-Government approach to ageing and a lifecourse approach to policymaking.

The challenge in this period of uncertainty is to ensure that the social protection net meets its aim of protecting the most vulnerable - when they need it - and to provide the necessary supports to help people age in place.  Inequality experienced by many older people reflects a cumulative disadvantage as a result of a lifetime of factors including socio-economic status, race, age, disability, gender, and geography. Identifying structural inequalities — such as the disproportionate burden of unpaid work that falls on women, gender inequality in the pension system, child poverty and homelessness — and building cross-society collaboration to address them — will benefit us all as we age.

An independent champion and advisor to Government in the form of a Commissioner for Ageing is vital to promote cohesive, efficient, best practice government policy and services for this growing cohort.

This role is urgently needed to protect the needs of current and future older people and to provide quality independent advice to Government, to safeguard the interests of older people and with statutory authority to:

We cannot wait for another crisis to focus public attention on the human suffering that results from these oversights. Ireland urgently needs an independent advocate and champion for older people in a Commissioner for Ageing. 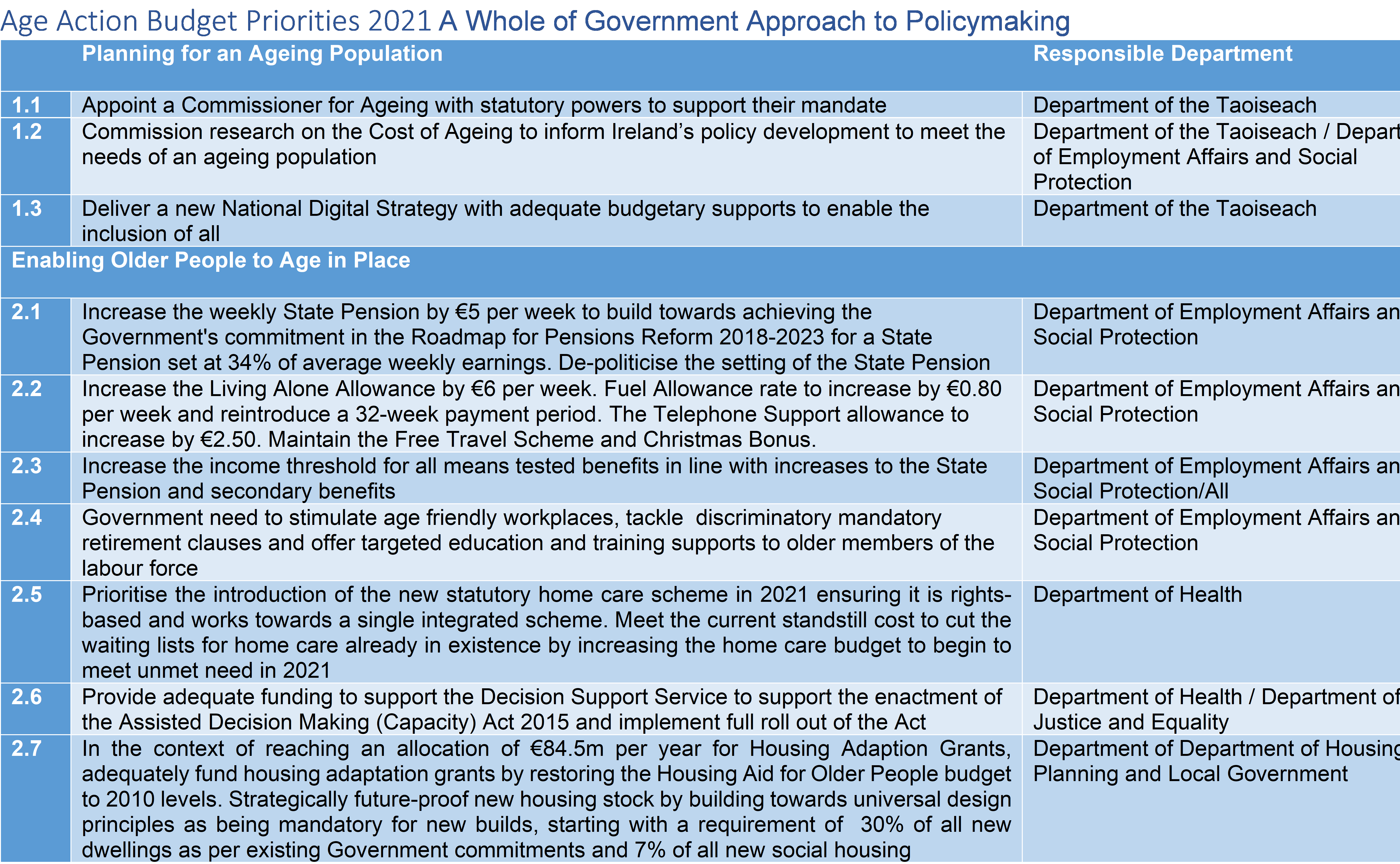 (15 June 2022)  On World Elder Abuse Awareness Day Age Action is reiterating the call for the establishment of a Commissioner for Ageing and Older Persons, with a supporting legal framework, that will ensure that we are all treated with respect and on an equal basis with the rest of the population in older age.

3,871 notifications of abuse for persons aged over 65 was reported in the HSE’s National Safeguarding Report 2021. Immediate family members are identified as the person of concern in reported cases of abuse of people over the age of 65.