Margaret Mullett, a retired science and chemistry teacher in her early seventies from Rathgar, Dublin, is this year’s overall winner of the Silver Surfer Awards 2015. 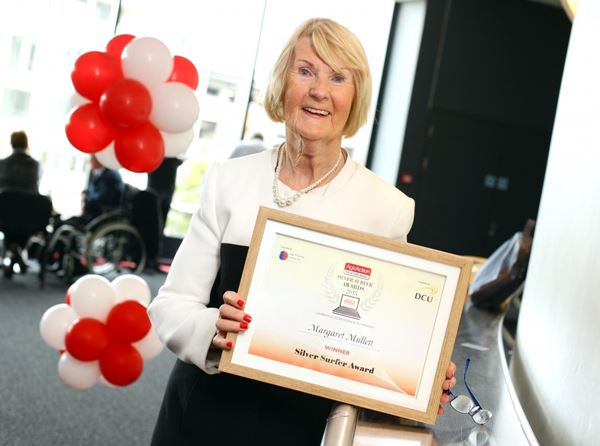 Margaret Mullett, from Rathgar, Dublin, the overall winner of the Silver Surfer Awards 2015

Margaret was presented with her award in the Helix Theatre in DCU this afternoon by Age Action CEO Eamon Timmins and broadcaster George Hook.

She was inspired to get online after she lost her husband, George, to a genetic disorder called haemochromatosis, an overload of iron in the system, just six weeks after being diagnosed. If identified early enough, haemochromatosis can be easily treated.

Determined to ensure that no other family would suffer a loss like her own, Margaret used the internet and digital media to build a national awareness campaign, highlighting the dangers of haemochromatosis and urging members of the public to get themselves tested.

Since she began in 2005, her campaign has focused new attention on the illness and more than 20,000 people have been diagnosed.

Eamon Timmins, CEO of Age Action, said: “Margaret is a truly inspirational woman, someone who suffered a terrible loss and dedicated herself to helping others avoid similar tragedies.

“She became a campaigner and learned how to use the latest technology to spread awareness about a disorder not widely known or understood, successfully encouraging thousands of people to get themselves tested.”

The awards ceremony was hosted by Dublin City University, which became the first age-friendly university in 2012, leading a global initiative.

Christine O'Kelly, DCU's Age-Friendly Project co-ordinator, said:  "Age Action is a member of our Expert Advisory Panel and we are delighted to support this event which encourages the use of technology amongst older learners.

“We are also looking forward to the first Age Friendly Conference - Engaging Ageing in DCU on November 2nd/3rd next where Age Action to will be hosting an information stand promoting their many activities. We hope that as many older people as possible will attend.” 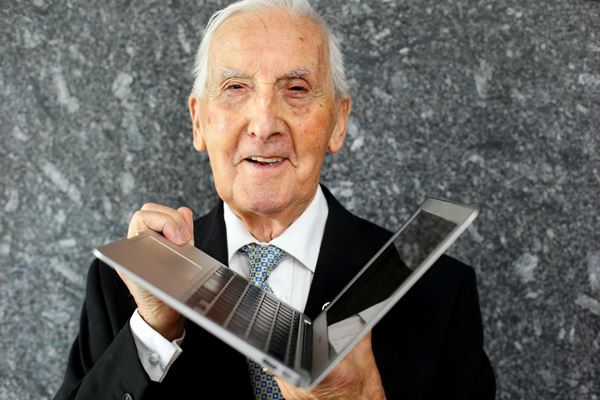 Corkman Philip O'Donovan, whose "Thought for the Day" email is delivered at 7.30am each morning to recipients in Ireland, the United States, Australia, the Netherlands and Britain

Four other awards were presented during the ceremony:

The New to IT Award went to Michael Monaghan from Nobber, Co Meath. In 2012 Michael, then a mini-bus driver for children with special needs, suffered a serious stroke and had to retrain himself in many things. He started with an iPhone, learning to use Viber to send messages and photographs. He now reads the papers, pays his car tax and most recently sorted out his water grant online while using skype to keep in touch with his family.

The Hobbies on the Net Award went to 83-years-young Stanley Jerrard-Dunne. Stanley is a vintage car enthusiast, researching, sourcing and buying parts online, but his real passion is writing. A self-professed science-fiction anorak, his first book, entitled The Adam and Eve Chronicles, is sold on Amazon in Kindle format and tells the story of a group of scientists who come up with an unusual way of overcoming the problem of over-population.

Pat Power from Waterford was the winner of the IT Tutor of the Year Award, which recognises the efforts of the hundreds of people across Ireland who volunteer with Age Action’s computer training programme, Getting Started. Pat has coordinated 15 courses in Waterford, recruiting learners and new volunteers along the way.

Corkman Philip O’Donovan was the winner of the Golden IT Award, which recognises the achievements of people over the age of 80. Every morning, at 7.30, more than a hundred people in Ireland, the United States, Australia, the Netherlands and Britain wake to a ‘thought for the day’ email message from Philip.

He has also used his computer to write a book about a local specialist school for children with complex disabilities – the Lavanagh Centre – and still does the taxes for family members and his local church.