Age Action is fighting to reverse changes to the State Pension, introduced in 2012, that have penalised tens of thousands of pensioners and we need your help on Wednesday 17 and Thursday 18 January. 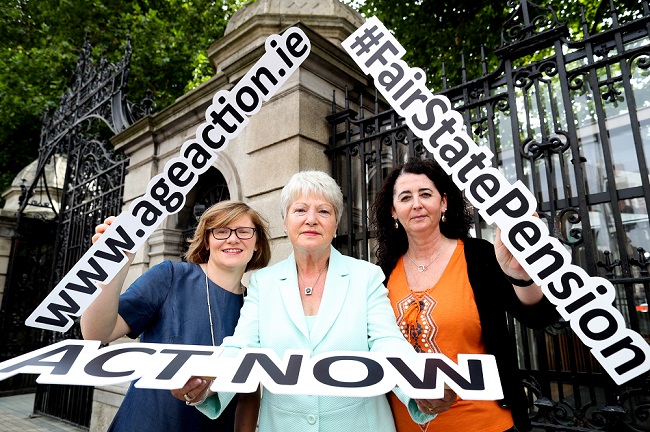 Campaigning for a fair State Pension

These changes, combined with the failure to backdate the Homemakers’ Scheme, have punished pensioners, predominantly women, who took time out of the workforce to care for their families.

In February 2017 Age Action published research revealing that more than 35,000 pensioners have lost out because of the 2012 changes, a number which has certainly risen since.

Under the previous system, for example, a pensioner with an average of 20 contributions would be entitled to €228.70. After 2012, this dropped to €198.60, a cut of more of more than thirty euro each week.

Two Days of Action in January

In the run up to last October's budget Age Action, along with the National Women's Council of Ireland and the Irish Countrywomen's Association collected more than 5,000 signatures on a petition calling for the changes to be reversed.

Although no such commitment was made in Budget 2018 such was the anger at the failure of the Government to act that the 2012 pension cuts became a major political issue and attracted national media attention.

In late October the Dáil passed a motion calling for the changes to be reversed and Minister for Employment and Social Protection Regina Doherty TD has committed to bringing a paper to the Cabinet to address this issue on 18 January.

And this is where we need your help!

Working with our colleagues in the NWCI, the ICA, SIPTU, IMPACT, Active Retirement Ireland and Pensioners for Equality we are asking everyone to Ring your TD on 17 January, the day before the Cabinet discusses this issue, and then to join us for a protest outside Leinster House on 18 January at 12.30pm.

We need your help to put pressure on the Government to ensure that they deliver a fair State Pension.