Call for more people to make an Enduring Power of Attorney

Age Action, as a member of the Safguarding Ireland Adviory Committee, is supporting Safeguarding Ireland's call for a major increase in the number of adults making an Enduring Power of Attorney (EPA), in order to safeguard and reduce adult abuse. 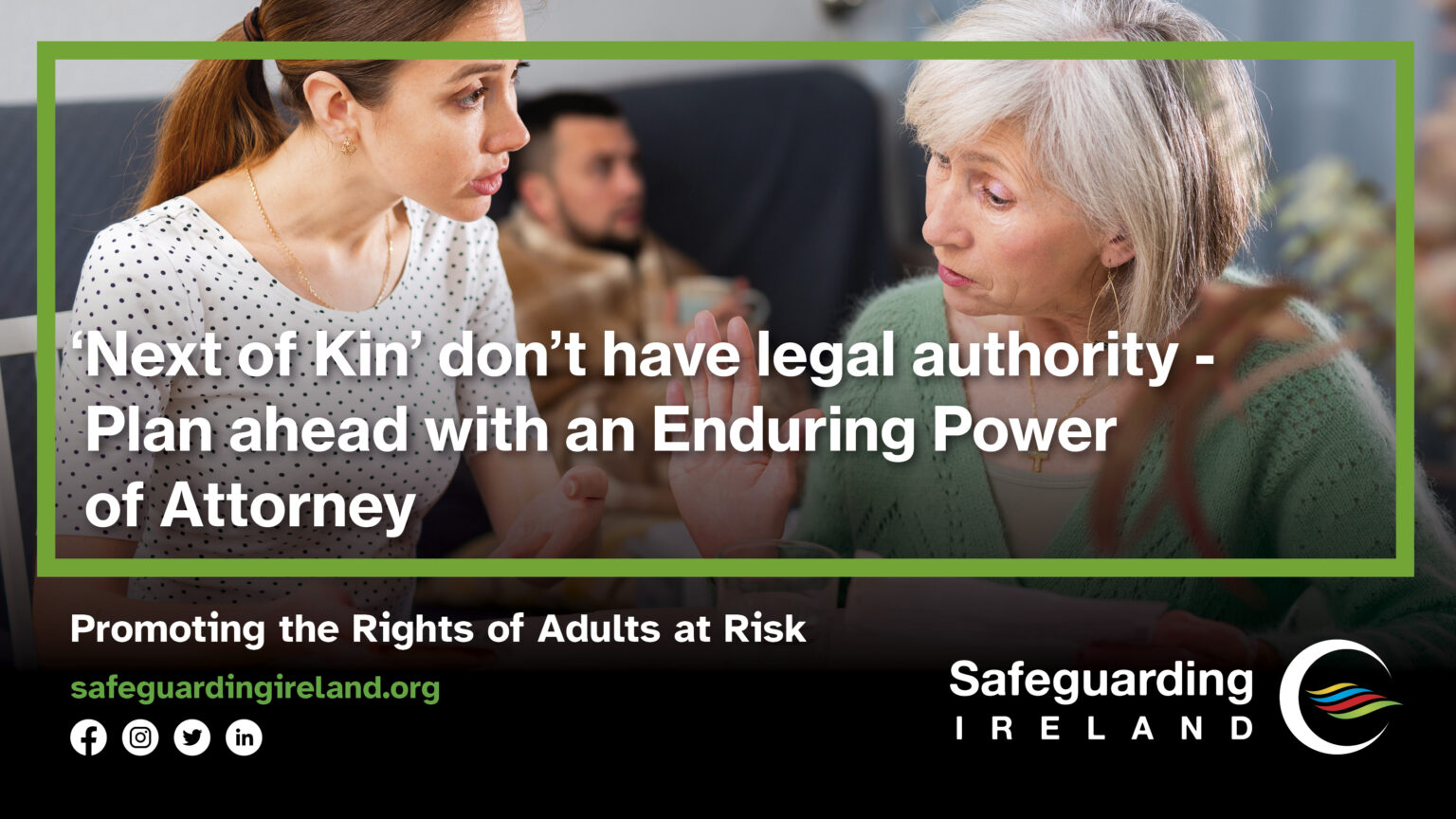 New research by RED C has found that just 6% of Irish adults have an EPA in place – which leaves people at greater risk of abuse and exploitation if they lack capacity to make decisions due to illness, disability or frailty.

Safeguarding Ireland is this week leading a nationwide public awareness campaign to encourage more adults to plan ahead, talk with their Solicitor and make an Enduring Power of Attorney.

RED C was commissioned to carry out a survey on a nationally representative sample of adults (1,000 people) on understanding of and attitudes to EPAs. The main reasons why the vast majority of adults had not made an EPA included:

Safeguarding Ireland Chairperson Patricia Rickard-Clarke said the level of take up of EPAs is closer to 30-40% in other European countries and she encouraged much greater take up in Ireland.

“An EPA gives legal clarity. It makes people’s wishes and preferences known and they can be followed. It reduces confusion, tension and problems in families including financial abuse and misuse of property and personal welfare. The vast majority of people are honest, but unfortunately international research has shown that up to 10% of people are dishonest in their use of another person’s money or property.

“To make an EPA people must make an appointment with a Solicitor and appoint their most trusted person with authority to make future decisions about their finances, property and personal welfare if needed.

“An EPA also sets out what decisions the appointed person, or Attorney, can make and provides guidance on the person’s wishes and preferences. Having an EPA in place is not just better for the person themselves – but it’s also much better for family, friends and professionals.

“When there is no EPA in place, there are risks. Close family members may be asked to help with decisions as a ‘next of kin’. However, next of kin is highly misunderstood in this country. A next of kin has no legal authority. A next of kin may not know a person’s wishes, and in some case may abuse their position and theft and crime occurs.

“Safeguarding Ireland therefore encourages all adults to make an EPA and to safeguard themselves against future risk of adult abuse.”

In terms of take up of EPAs the RED C survey found:

A detailed information booklet on making an EPA is available at https://www.safeguardingireland.org/public-awareness/

(Tuesday 27 September 2022) Age Action welcomes emergency measures in Budget 2023 to help older persons cope with the cost of living this winter. The announced double pension payments and the electricity credits are a welcome recognition by the Government that many older persons are struggling with basic costs like food, energy and running a car in rural Ireland. In addition, lump sum payments for those living alone or in receipt of Fuel Allowance will target those who are most at risk of poverty.