She was presented with her award at a ceremony this morning by well-known TV and radio personality Baz Ashmawy and his amazing mum Nancy. The ceremony was officially opened by Minister of State for Mental Health and Older People Helen McEntee TD.

Doreen is originally from London and was a wireless operator during World War II before working as an accounts clerk. She has two sons, Derek and Peter. In 2013, Doreen moved to Ireland to be near Peter, her five grandchildren and seven great-grandchildren following the death of her husband two years earlier.

She lives in the TLC Nursing Home in Maynooth, which had to install a wifi booster for her on arrival as there was no way Doreen was going to be separated from her beloved iPad.

Doreen received a record number of nominations from staff and residents in the nursing home as well as family and friends across Britain and Ireland.  She keeps in touch with her family using Skype and Snapchat while also shopping online and googling pictures of birds to identify the feathered visitors to her garden just outside her bedroom window.

Inspiring all of us

“Doreen is an amazing woman, inspiring all of us to know that age is no barrier to taking advantage of the thrilling opportunities presented by the internet and new technology," said Eamon Timmins, CEO of Age Action.

"The majority of older people in Ireland have never been online. We hope Doreen and all of our Silver Surfers encourage anyone with a computer sitting unused in the kitchen, or a tablet still in its wrapping paper, to get online and open up new worlds of information and entertainment.

“What a worthy winner Doreen is," said Carolan Lennon, Managing Director, open eir. "She’s a great example to all to all of us and certainly shows that age is not an issue when it comes to using technology. We are thrilled to support this great initiative which recognises, celebrates and rewards all of the great things Silver Surfers across Ireland are doing.

"We’ve made no secret of the fact that with our own fibre rollout programme we are on a mission to get communities across Ireland connected.

"When you see the amazing activities that Doreen and the rest of today’s winners are doing online – whether it’s running a business, discovering a new hobby or staying in touch with family and friends it really demonstrates the power of being online and the very positive difference it can make to everyday life”. 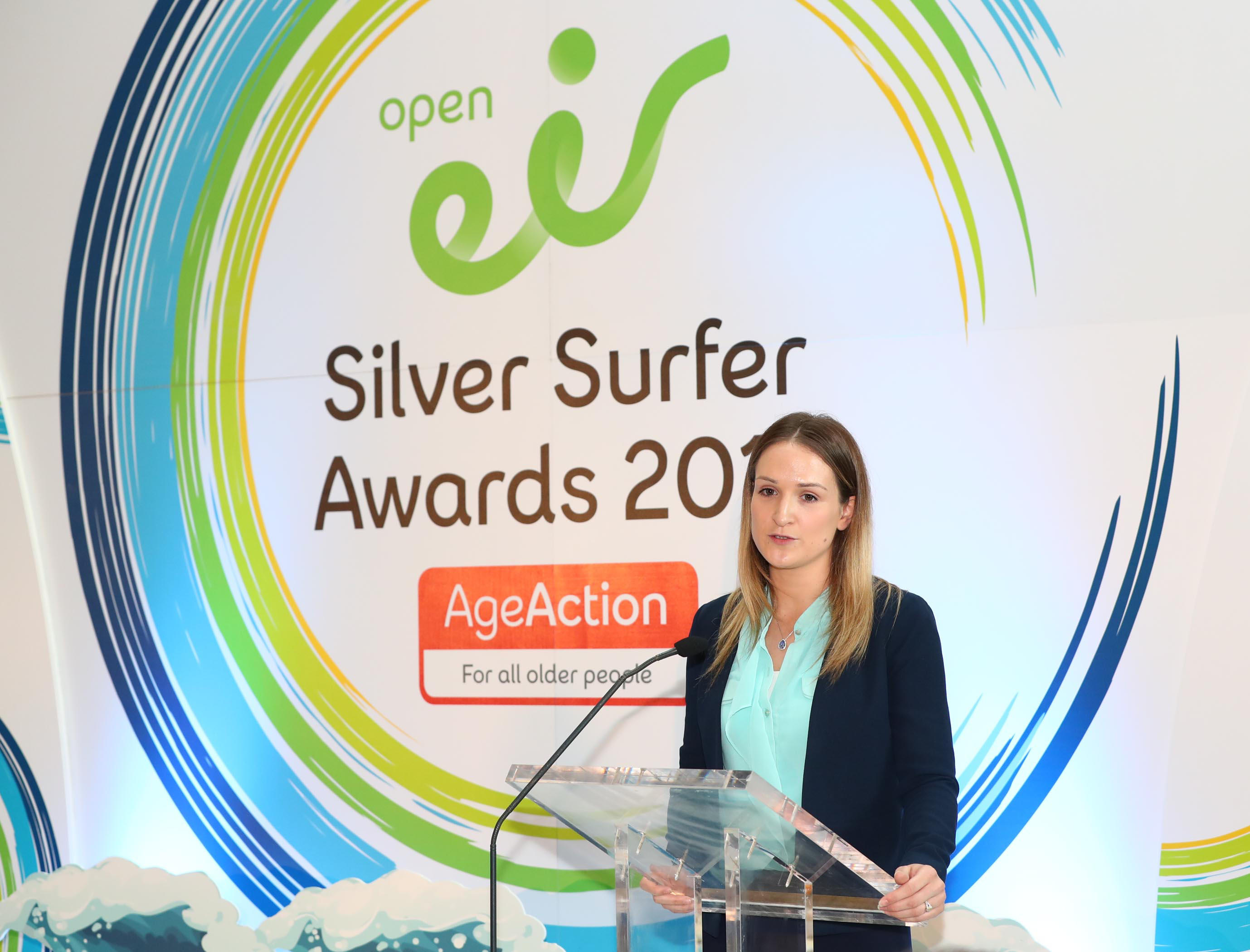 “Going online can have enormous benefits for older people and I would encourage everyone to embrace technology," said Minister of State for Mental Health and Older People Helen McEntee TD.

"If we do it can open up a whole new world of opportunity, helping to reduce social isolation, allowing us to develop and pursue new hobbies and interests, as well as making new friends.

"Our later years can be a time of continued learning, of new experiences and adventures, of challenging ourselves to gain new skills and follow new pursuits. We all need to break down those stereotypes of older people as vulnerable, sick, and dependent.”

The Minister of State praised the open eir Silver Surfer Awards as “a wonderful way of highlighting that we are never too old to learn, to try something new, and to challenge ourselves”.

Minister McEntee congratulated all Silver Surfer award winners and nominees, noting that Age Action’s Getting Started Computer Training Programme along with the roll out of a high speed broadband network is instrumental in helping older people to take advantage of what technology has to offer.

Four other awards were presented during the ceremony:

The New to IT Award went to Brendan Crean from Kilbarrack, Dublin. Brendan has never let being diagnosed with cerebral palsy stand in his way and in recent years has developed a passion for social media and the internet while attending adult education classes with KLEAR in Kilbarrack.

He now blogs on a weekly basis and uses his Facebook and Twitter profiles to lobby his local councillors and TDs on behalf of people with disabilities.

In only five years Betty Smith from Bandon, Co Cork, has gone from learning to send emails in an Age Action class to winning the Hobbies on the Net award today. The skills she learned there were essential to starting her own business making Poitín Marmalade – sourcing ingredients and negotiating with suppliers online.

Her award-winning marmalade is now in 35 stores across the south of Ireland, not bad for a lady in her 80s who shows no sign of slowing down and is already hard at work trying to make Bandon an Age-Friendly town.

Frank Brady from Malahide in Dublin was the winner of the IT Tutor of the Year Award, which recognises the efforts of the hundreds of people across Ireland who volunteer with Age Action’s computer training programme, Getting Started.

Since 2012 Frank has delivered a staggering 200 separate training courses, each between 8-10 hours long, to older people across the capital. He regularly does housecalls and provides technical support while always reminding us that he gets as much out of teaching the courses as the learners do from participating.

Golden IT Award winner and retired Wexford garda John Hayes left school at 13 years old to help on the family farm but his determination to succeed drove him to teach himself to read and write at the age of 20 so he could join the Gardaí and serve his local community.

Showing he’s still unafraid to learn he has embraced everything the internet has to offer, Skyping his siblings in America, using Facebook to keep in touch with nieces and nephews around the world and playing bridge online with friends and strangers alike from the comfort of his own home.